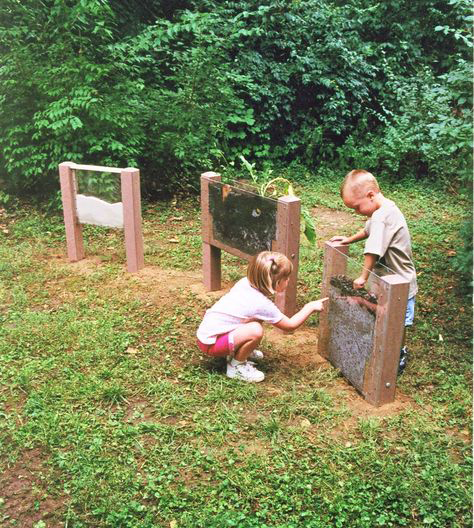 This Ant Farm (also called a formicarium) is a must have on a natural or any other playground.

Have you ever watched ants going into and out of their nest, and wondered what was going on underground? It’s pretty hard to find out from the surface. If you dig up the nest, the ants get really upset, and of course their tunnels are destroyed at the same time, so the simplest way to watch what ants do inside their nest is to trick them into thinking they’re underground when they actually are not!

The formicarium was invented around 1900 by Charles Janet, a French entomologist and polymath, who had the idea of reducing the three dimensions of an ant nest to the almost two dimensions by squeezing it between two panes of glass.

He never patented his invention, so the first commercial ant farm was sold around 1929 by Frank Eugene Austin (1873–1964), an inventor and professor at the Thayer School of Engineering at Dartmouth College in New Hampshire!

This simple element is full of fabulous learning opportunities, and helps kids develop a better understanding of the natural world.

Specify which one in the pull down menu!